There is no doubt that a pony indigenous to Connemara has existed for many centuries. By the nature of its environment it has required certain attributes to survive. These are vividly portrayed by some of the earliest chroniclers of the horse. Progress has improved the life style of the people; the onerous workload of the pony has been lifted, but the country God created, known as Connemara, cannot be converted into a land of milk and honey by progress or by man. It remains as it always has been, a land of awesome starkness and beauty, of mountains which show no green, of bogs which bear but sedges, of coasts which have no shelter from the Atlantic and of small enclosure which have but stone walls and fuchsia hedges. This is where the Connemara pony continues to live and breed. In spite of many and various infiltrations of outside blood over the years it retains those same attributes, which have enabled it to survive the hardships of its natural habitat.

Congested Districts Board
In 1891 the Congested Districts Board was established. The Boards objectives were to try and encourage the people living in the over populated areas of the western seaboard to improve their way of life. As one of these measures the board introduced a variety of different stallions into Connemara to improve the breed. Many of the stallions introduced by the Board were considered to be very unsuitable for crossing with the Connemara pony and the results from crossing with the native mares were very unsatisfactory.

In 1900 the Dept of Agriculture commissioned a report on the pony in Connemara. In his study Profession Ewart, M.D.F.R.S. of Edinburgh University who was commissioned to survey the West of Ireland in consultation with local experts to study the actual conditions and possibilities of developing the Connemara Pony suggested that a more developed breeding plan was needed than sending in high-class sires to the area. There was recognition of the need to have quality brood mares as well as quality sires, located at indigenous stud farms to perpetuate the best characteristics of the Connemara Pony. The primary objectives of these farms was to increase the bone and improve the makeup of the Connemara Pony without destroying the hardiness, vigour, stamina and temperament of the breed.

Connemara Pony Breeders Society is born
This was to be the start of an ongoing interest. Michael O’Malley whose untiring efforts on behalf of this native breed eventually led to the formation of the Connemara Pony Breeders Society in 1923. This was the first serious step that would lead to the preservation and improvement of the Connemara Pony. It was felt that there was plenty of “old breed” to be found in the heart of the pony districts of Connemara, and it was the opinion of the Society that the best results were likely to be obtained by breeding only from carefully selected native stock.

The scheme, which was approved and adopted by the Society, was: That the improvement of the Connemara Pony should come from within, and the best of the available native blood to be selected and mated in a proper manner; Up to 100 mares of the right type to be selected for a foundation stock, as well as the necessary number of stallions That the Galway County Committee of Agriculture be asked to give a grant of £100 and also the Department of Agriculture to be asked for another £100. The former to enable to the Society to offer free nominations to mare owner, and the latter for purchasing the necessary number of stallions and for the organising and giving of prizes at a local show during 1924.

The objectives of the Connemara Pony Breeders Society were:

An inspection programme got underway in April 1924 offering 125 free nominations of £1 to brood mares of suitable types selected at centres throughout Galway. These inspections were central to the foundation of the Stud Book and have continued to be an integral part of the monitoring and safeguarding of the breed up to the present day.

The initial Connemara pony shows were held as follows: – 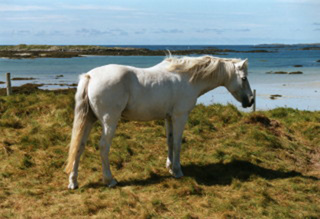 It was not until 18th August 1947 that the Societies Annual show moved its permanent showground’s to Clifden. Many changes have taken place within the Connemara Pony Breeders Society since 1923. However its main function is still to preserve the pony as a distinct breed, by inspecting all ponies for registration and maintaining a Studbook. It has also the added responsibility of being the Parent Society to the large number of overseas societies. The International committee of Connemara Pony Societies meet annually at Clifden to review rules and regulations governing a common policy.

Description and points of the Connemara pony